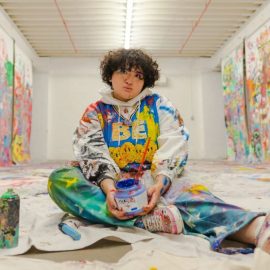 Emili Lang, NFT artist who made a name for herself by seeing unemployment and failure in life

Emily Young, a digital artist and NFT virtuoso, joined Variety and Kering at the 75th Cannes Film Festival on Friday for an inspirational “Women on the Move” talk.

It is quite remarkable that the artist has gone from unemployment insurance to a prominent name in the NFT-driven digital art space under the alias pplpleasr in just two years.

The NFT artist began her career as a visual effects artist and has worked on studio projects such as Batman v Superman and Wonder Woman, and in 2020 she was even offered a job as a digital artist by tech giant Apple. But the offer vanished when the pandemic struck.

In terms of her preferences, she emphasized that it was the first time she began creating art for herself, as she had previously done art for other major Hollywood studios. It was done to make herself feel like she was doing something worthwhile with her life.

it’s been a while since i’ve released anything new, but after working on this since september i’m proud to say we’re releasing the beta of @shibuyaxyz today 😭

Emily Young creates visual effects for films such as Batman v Superman and Wonder Woman. This occurred prior to her decision to address the “facade” of the decentralized finance world movement. PleasrDAO, an NFT investment club, was inspired by a video for the Uniswap DeFi project.