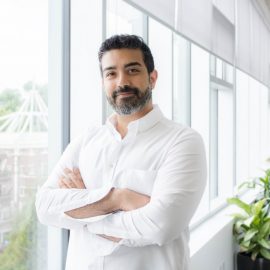 Entrepreneur Roham Gharegozlou was born in Iran and raised in Dubai, Paris, and Canada before settling in California. He graduated from there with a master's in biological science and a bachelor's in economics.
Follow
Metaverse Post » Roham Gharegozlou, Founder and CEO of Dapper Labs

In 2013, Gharegozlou co-founded Axiom Zen, an award-winning innovation hub focusing in creating new platforms and cutting-edge technologies like blockchain and artificial intelligence. Gharegozlou created his first firm when he was just 14 years old. He established Dapper Labs, a blockchain and software development business, in 2018 from the roots of Axiom Zen. The blockchain-based game CryptoKitties was developed by Dapper Labs, which received $12 million in backing from well-known venture capital firms like Andreessen Horowitz and Union Square Ventures.

After launching the Flow blockchain in 2019, Dapper Labs created NBA Top Shot, its most successful product so far. NBA Top Shot is a marketplace for National Basketball Association fans, who can build a digital collection featuring their favorite players, and for NBA associates, who can count on a new revenue stream. One of the first highly popular nonfungible token, or NFT, collectibles was Lebron James’ dunk tribute to Kobe Bryant, which was memorialized as an NBA Top Shot “Moment” that drew 400,000 people to the platform simultaneously.

Gharegozlou is also an angel investor who has helped build over 19 different companies and was included in Technology Innovators’ “Top 25 BlockchainTechnology CEOs of 2020” list.

The NBA Top Shot platform will continue to be developed under Gharegozlou’s direction, introducing supply and scarcity, greater metaverse involvement, and an enhanced user experience. In 2021, NBA Top Shot’s user base increased to over 1 million, and it is anticipated that Gharegozlou will want to match that rate of growth in 2022.

Dapper Labs is growing in all directions, including by acquiring the influencer platform Brud to establish a decentralized autonomous organization. The business will support the creation of online communities that can cast votes on significant issues like funding investments and governance using ownership tokens.

Dapper Labs will have the opportunity to create new sports services on the Flow blockchain this year thanks to its partnership with the Spanish soccer league LaLiga, which was another noteworthy success of 2021. LaLiga features elite teams with enormous global fan bases, such FC Barcelona and Real Madrid CF. Dapper’s reach will probably be increased by Gharegozlou in the music and entertainment industries.

This year, Dapper Labs will put a lot of effort into the metaverse, but there will be one key obstacle to overcome: creating an open metaverse where digital lives are controlled by open, transparent blockchain software rather than private servers.

Here is what you can find in the “Experience NFT” art exhibition in Barcelona
October 7, 2022