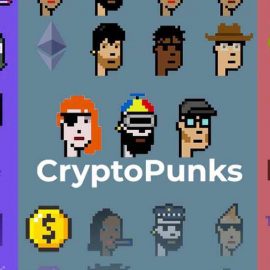 On the Ethereum network, CryptoPunks is a collection of nonfungible tokens. The initiative was started in 2017 by the co-founders of Larva Labs, Matt Hall and John Watkinson. It started out as an experiment but ended up serving as a catalyst for the widespread use of NFTs.
Follow
Metaverse Post » CryptoPunks, NFT collection

Within the collection, there are exactly 10,000 different Punks: 6,039 men and 3,840 women. Although there are other varieties including zombies, apes, and aliens, most punks are humans. Punks are distinguished from one another by their distinctive characteristics, which transcend their racial distinctions.

CryptoPunks were initially distributed without charge by their authors. Anybody might become a Punk by only paying the required Ethereum gas price. The cost of punks has since increased dramatically, though. The least costly Punk currently on the market is listed for over $200,000, while the most expensive Punk to date to sell on-chain sold for approximately $24 million.

Excellent article on the emerging #NFT market by art market expert Ewa Hess @askewa in the Sunday edition of Swiss newspaper @tagesanzeiger. Grateful and honoured for the mention alongside established platforms such as @SuperRare and @opensea.

Starting 2022, CryptoPunks continued to dominate the NFT market. The project has so far amassed total sales of more than $2 billion. Even when the cryptocurrency market began to slow down, the collection’s monthly volume remained above $100 million. When #5822 sold for approximately $24 million on February 12, the record for the most expensive on-chain transaction was once again shattered. A sizable collection of CryptoPunks valued at $30 million was set to be auctioned off by Sotheby’s on February 23. However, the collection’s unknown owner abruptly canceled, adding, “Nvm, chose to hodl.”

Although the project stands out because of its costs, CryptoPunks will keep spreading awareness of NFTs and blockchain-based ownership in 2022.