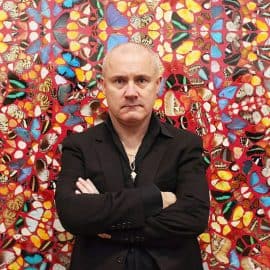 With an estimated net worth of $384 million, Damien Hirst is the wealthiest visual artist currently working in the United Kingdom. Hirst rose to fame in the 1990s as a result of his involvement in numerous shows, and the U.K.'s heritage secretary referred to him as a "pioneer of the British art movement."
Follow
Metaverse Post » Damien Hirst, British visual artist

For his piece “The Physical Impossibilities of Death in the Mind of Someone Living,” which depicts a dead tiger shark preserved in formaldehyde, Hirst was nominated for the annual Turner Prize in 1992. The sculpture “Mother and Child Divided,” which depicts an adult and a baby cow both split in half and frozen in formaldehyde, earned the artist the Turner Prize in 1995. For their contentious topics, both pieces of art have drawn their fair share of criticism. In 2008, a single-artist auction featuring works by a British artist broke the previous record set by a Pablo Picasso auction in terms of sales. Through Sotheby’s, he held an auction called “Beautiful Inside My Head Forever,” which brought in $198 million.

The artist acknowledged his belief in nonfungible tokens in 2021. Hirst asserted in favor of NFTs that it’s feasible that galleries will go extinct before NFTs. Additionally, the artist published a number of NFT volumes, including “The Currency” and “Great Expectations.”

Beginning the year, Hirst reimagined 12 of Eminem’s album covers. The Iovine and Young Foundation, which is constructing a new school in South Los Angeles, will receive the proceeds instead of the artist receiving any commission for the piece.

In addition, Hirst revealed that he will release “The Empress,” a new series in February that will include five brand-new pieces of art named after five female monarchs. The works will be sold by the artist through Heni, with the option to buy the actual prints outright or a Heni Editions NFT Deed that entitles the holder to eventually claim the actual prints. In the end, Hirst is anticipated to continue his NFT drops through 2022, bridging the gap between the conventional world and the digital one.