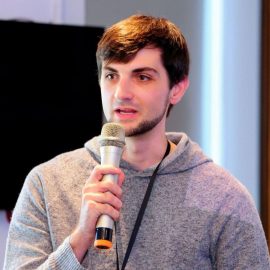 Antonio Juliano is a software developer from the United States and the founder of the decentralized exchange dYdX. After graduating from Princeton University with a computer science degree in 2015, Antonio began working as a software engineer at Coinbase, where he learnt about cryptocurrency and the world of blockchain. He was captivated by the new technology, especially after hearing some of the most famous players in the space, such as Vitalik Buterin and Polychain Capital founder Olaf Carlson-Wee, give speeches at Coinbase. Hearing them discuss smart contract development and gas utilization on Ethereum got him intrigued about what blockchain technology could provide.
Follow
Metaverse Post » Antonio Juliano, Founder of dYdX

He was ready to launch his own startup after only one year at Coinbase while still working as a software engineer for Uber. He began by creating Weipoint, a search engine for the decentralized web. The initiative did not gain traction, and he later stated that it had as few as 10 users in total. He did, however, learn a few lessons from the event, notably the importance of timing when launching a product that outperforms its use case.

He quickly recognized the significance of creating something on Ethereum that may bring some innovation to the decentralized finance sector. As a result, he began working on dYdX, building on the structure of decentralized spot exchanges Kyber and Ox and adding derivatives to their offers. dYdX was created in 2017, and it quickly became one of the world’s fastest-growing decentralized exchanges.

A major goal of mine this year is to consistently share high quality thoughts on dYdX’s strategy publicly Here I’ll link to each one of my important tweet threads, and continue adding over time

The exchange is now a hybrid decentralized exchange, which means that while most components are decentralized, some are run on servers owned by dYdX Trading Inc. and its partners. According to the company’s CEO, the challenge for dYdX in 2022 will be to entirely decentralize. The first goal will be to produce v4, the next version of the protocol, before the end of the year, which will work without the use of any central components.

The objective of the company is for dYdX v4 to be open-source, decentralized, and completely managed by the community. The company is also looking into introducing new features to the exchange, such as spot, margin, and other synthetic trading products, improved margining and collateralized options experience, and the addition of new trading markets.