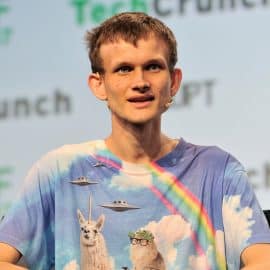 One of the creators of the Ethereum blockchain and the associated cryptocurrency, Ether, is Vitalik Buterin. Buterin, who was born in Russia in 1994, was raised in Canada, where he achieved academic success. Buterin's foray into cryptocurrency started in the early years of the sector, when he developed an interest in Bitcoin in 2011.
Follow
Metaverse Post » Vitalik Buterin, Co-founder of Ethereum

Buterin created the idea for Ethereum, releasing a white paper describing the new blockchain in 2013. He also co-founded Bitcoin Magazine in 2011. Buterin created Ethereum to fill the hole left by a more adaptable blockchain than Bitcoin.

After the launch of the Ethereum blockchain in 2015, Ether solidified its position as the second-largest cryptocurrency asset in terms of market value. Although Buterin was the one who brought Ethereum’s white paper to life, many other minds contributed to the project’s co-founding and launch.

Buterin has stayed active in the Ethereum community throughout the years, making him a key player in both the growth of Ethereum and the larger crypto industry.

Given Ethereum’s prominence in the cryptocurrency industry, Ethereum 2.0 has inevitably become a significant topic of discussion in light of the blockchain’s challenges.

Buterin wrote a piece titled “Endgame” in December 2021 in which he discussed a possible direction Ethereum 2.0 might go in. Buterin mentioned the possibility of less decentralization as a cost of greater rollup-enabled scalability.

Buterin is anticipated to be involved in the development of Ethereum 2.0 at every stage of the process; it is more of a journey than a single event. The transition to Ethereum 2.0 was place throughout 2021, and subsequent progress will probably be made in the new system in 2022. The Merge, a procedure that will join Ethereum and Ethereum 2.0 in 2022, is expected to take place, but both networks will continue to function for a while.

One can ask what benefits Ethereum 2.0 might have for the Ethereum-heavy DeFi and NFT sectors if it finally leads to increased scalability.

EU sanctions will not affect NFT holders from Russia
October 6, 2022