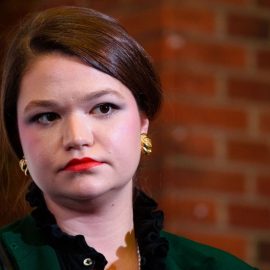 Brittany Kaiser is the current head of the board of Gryphon Digital Mining, a company that does eco-friendly crypto mining. She is a co-founder of the Own Your Data Foundation, which promotes digital intelligence, and the Digital Asset Trade Association, which works to create legislation that protects people's rights to retain their digital assets. She is well-known around the world as a data rights activist and whistleblower in the Cambridge Analytica data scandal.
Follow
Metaverse Post » Brittany Kaiser, Co-founder of Own Your Data Foundation and Digital Asset Trade Association, chair at Gryphon Digital Mining

Kaiser was the director of program development and business development at the now-defunct political consultancy firm Cambridge Analytica from 2014 until 2018. She eventually left the organization, revealing the firm’s inner workings and how it exploited civilian data to target voters.

In 2019, Kaiser appeared in the Netflix documentary The Great Hack, which investigated Cambridge Analytica’s involvement in many countries’ political landscapes, including the United Kingdom’s Brexit campaign and the United States’ 2016 federal election. In the same year, she wrote and published Targeted, a book that tells the inside story of how huge actors are unlawfully capturing and using data to influence people’s decisions.

Kaiser works on data ethics and privacy rules in a variety of initiatives across sectors. She is also a public speaker, having spoken at major events such as the United Nations, European and British parliaments, the G20, and the Web Summit. She has also spoken at Harvard, Oxford, and Columbia.

While not yet confirmed, Kaiser is likely to provide keynote lectures both online and in person, as she did in 2021. There are no announcements of what 2022 holds for Own Your Data Foundation, but it’s also expected to continue its quest to educate the world on digital intelligence.

With Kaiser on board, the organization is likely to continue facilitating training programs in local school systems and achieving its objective of expanding into enterprises and governments.