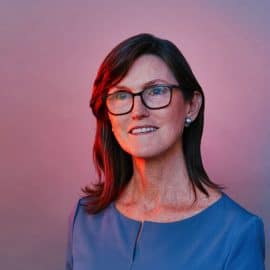 The founder and CEO of Ark Invest, an investing company that administers a number of exchange-traded funds, is Cathie Wood. She is well-known in the finance community, and in 2020, Emeritus Matthew Winkler, Bloomberg's chief news editor, named her the best stock-picker of the year. In economics and finance, Wood has a bachelor of science from the University of Southern California.
Follow
Metaverse Post » Cathie Wood, Founder and CEO of Ark Invest

Cathie Wood has worked in the financial industry for more than three decades. When she started working for Capital Group as an assistant economist in 1977, she made her first venture into the real-world capital markets. Since then, she has had jobs in significant businesses including Jennison Associates, Tupelo Capital Services, and AllianceBernstein that are related to finance. In 2014, she established Ark Invest. To maximize results, the corporation frequently uses thematic investment methods.

Wood, a devout Christian, is said to have named her business after the Ark of the Covenant, a holy object referenced in the Bible. The “Ark” in Ark Invest actually stands for “Active Research Knowledge” in the official sense. Wood has been optimistic about the Bitcoin market for a while. She recently stated that by 2030, Bitcoin will surpass the $1 million level.

Wood will have a busy year in 2022 as her business restructures its investment portfolio to halt the famous Ark Innovation ETF’s free-fall. After rates dropped to below $15 at the beginning of February 2022, Ark Invest bought about 2.45 million Robinhood shares. The HOOD stock, meanwhile, has dropped more than 50% of its value in the last 12 months. The latest purchases made by Wood show that she is feeling confident.

Wood has openly stated her support for the bitcoin industry, and in February, she discussed how the blockchain sector is developing. She claimed that Web3 applications powered by blockchain technology would transform the internet as we know it. She emphasized that despite the technology’s current state of underdevelopment, it had enormous potential.

Here is what you can find in the “Experience NFT” art exhibition in Barcelona
October 7, 2022